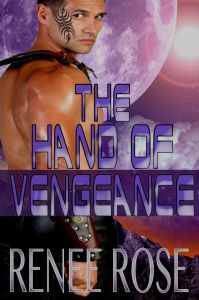 Greetings! I’m Alexis Alvarez, and today I’d like to welcome Renee Rose to the blog.  Renee is a best-selling romance writer who’s just published a new novel, The Hand of Vengeance.  She’s here to tell us about the book and share a snippet. Here’s Renee:

Thank you so much for having me today to talk about my first sci-fi, The Hand of Vengeance. The book gets its name from the hero, Blade Vengeance. The rebels use code phrases when using their communications units and his identifier is: The hand of vengeance strikes. Obviously, I love the double entendre of having that in a spanking romance! 🙂

In The Hand of Vengeance, The heroine is a doctor on a humanitarian mission from Earth. When she’s kidnapped by the rebels to perform a difficult surgery, their airship is shot down and she’s stranded in a canyon with Blade. She doesn’t know anything about living in the wild, so she’s forced to rely on the intimidating warrior for survival.

“Where are we going?”

“We’re going to try to find a way out of here without getting ourselves killed.” Grasping her hand, he stalked forward, through the trees. Not in the let’s stroll through the woods together sort of way. More like, I’m in charge of you, honey and if you give me any more trouble I won’t hesitate to spank your ass again.

Damn if the thought didn’t make her knees go weak. Literally. She stumbled and he pulled her upright, glancing back. She flushed, something fluttering in her belly. Her traitorous body became suddenly aware of him in a new way: as a sculpted mass of masculine virility and power. Her skin flushed and prickled.

It must be the atmosphere on this planet because she hadn’t felt anything sexual for any male—or female for that matter—in years. Maybe not even since puberty. She’d been too busy in med school, and after she’d passed the boards, she’d worked insane hours on planets in every galaxy. There hadn’t been any time to date or get romantic with anyone, even if there’d been someone attractive to her.

She watched the muscles of his back ripple with movement, the broad shoulders leading into giant biceps. He even had ripped forearms. And those hands…she tore her eyes away from his huge hands, willing herself to stop thinking about the fact that they had just paddled her poor, blazing bottom. Her cheeks throbbed in response. She reached back to rub one with her free hand and caught the corner of the rebel’s mouth lifting in a smirk.

The Hand of Vengeance

On a humanitarian mission to the war-torn planet Jesel, Dr. Lara Simmons is used to dealing with lack of supplies, power outages and the constant earthquakes that afflict the planet. But when she’s captured by the rebels who need her to perform a life-saving surgery, she finds herself in a situation her medical training didn’t prepare her for.

When the airship is blown out of the sky, she ends up in the Jeselian wilderness with no one to rely on but Blade Vengeance, an enormous tattooed rebel warrior. Dominant and unyielding, he doesn’t hesitate to take her in hand when she disobeys the rules he lays out for her. Yet she soon learns he also knows how to deliver pleasure–with a passion she’s never before experienced.

Blade finds the doctor from Earth sexy as hell, especially when she’s giving him attitude, but once he delivers her to headquarters, he tries to pull back from her allure. Known for single-handedly starting the revolution and freeing many of his people, his life is one of hardship, slavery and war. Going soft on a woman isn’t part of his plan, especially with the final strike of the revolution so close. But when he sends Lara back to Earth to keep her safe during the upcoming battle, he inadvertently delivers her into enemy hands. Can he find and save her from the revolution he caused? 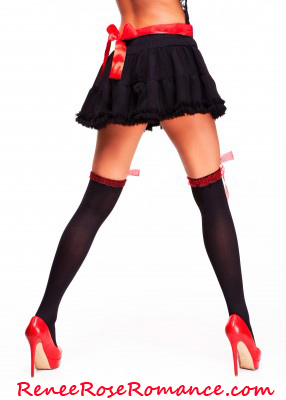 Thanks for joining me today, Renee! Best of luck with the new book.  As an FYI, I’ve read it and couldn’t put it down once I started.  If you’re a fan of action, sci-fi and some sexy spanky fun, this is the perfect evening read.