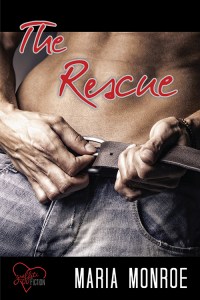 An excerpt from The Rescue by Maria Monroe
Order The Rescue now on Amazon.com

The whiskey and my urge to forget what had happened that day conspired and compelled me to walk right up to him, stand way too close, and say in my best sultry voice, “You’ve been staring at me all night.”

His face was still hard, and I got the impression that if he could have, he would have taken a step back, but he was almost against the wall already, and there was something stubborn in him. He exuded confidence and toughness, suggesting that under his clean-cut exterior he might be trouble. No, there was no might about it. The gleam in his eye and the way he put all my senses on edge proved he was definitely trouble.

“The only way you know that,” he said, his voice arrogant and low, “is because you were looking at me.”

Touché, I thought. It was true. I smiled, but he didn’t. He looked angry, but there wasn’t any reason for it, and I felt momentarily confused. This flirting thing: maybe I wasn’t so good at it.

“What are you doing here?” I asked.

“What do people usually do in bars?” he asked.

“I haven’t seen you around. Are you visiting?”

“In a manner of speaking,” he answered. We were standing so close, facing each other. I could hear laughter, music, and the clink of glasses drifting down the hallway from the bar, but it all seemed so far away. I didn’t know who he was or where he was from, but suddenly all I wanted was to feel his body against mine, to pull him by his stupid untied tie toward me and kiss him.

I grabbed his tie and pulled so that his head bent toward mine. His face, which had been steel before, changed slightly as a menacing grin, small but there, appeared. Desire coursed through me suddenly, so unexpected and strong that I started to imagine leading him into the bathroom—which was more sanitary than bar bathrooms usually are—and tearing off that suit jacket and that shirt. So many buttons—I’d undo the rest of them in a second. I tugged his tie to bring him closer still, but then he resisted.

“How do you know what I want?” I asked. In an uncharacteristic burst of boldness I let go of his tie and ran one hand down his chest—then lower still, inhaling sharply as I felt how hard he was already. “It feels like you want it too,” I whispered.

Suddenly, he pushed me back against the other wall, pinning me to it with his firm physique. His erection was so hard as it pressed against my stomach. A moan escaped my lips. It was hard to breathe. I couldn’t remember ever wanting someone as badly as I wanted him. And I didn’t even know his name.

“You would regret it so badly if you let me fuck you tonight,” he whispered harshly into my ear. “Trust me.”

“Why should I trust you? I don’t even know you,” I whispered back. “It’s one night. We both want it. What’s there to regret?” I couldn’t believe I was being so shameless, but I didn’t care; I felt like he was a challenge, and I never gave up on anything if I could help it. I think that made me want him even more.

“Trust me,” he repeated, but his hand was moving, landing on my waist, barely holding me but so hot even through my shirt.

“Are you a lousy lay? Is that why I’d regret it?” I couldn’t believe I was talking like this, but the words were out before I could pull them back.

He laughed, a sarcastic sound tinged with anger. “First of all, I am anything but a lousy lay, which is one reason you’d regret it. Nobody would ever fuck you as good as I could, and you would never, ever forget it.”

If I was turned on before, those words, as arrogant as they were, about pushed me over the edge. A tingling began between my legs, and I wanted more than anything for him to touch me, just once. I pushed against him, and he pushed back, his hardness grinding into me. I sucked in my breath. He leaned toward me, so close that I could feel his words on my ear. “But you would regret it mostly because—”

I interrupted him. I didn’t want to hear about regrets. “Admit it,” I whispered. “I can feel it. You want me as much as I want you. I bet you can’t stop thinking about how it would feel to be in my mouth.”

He groaned quietly. “Jessica,” he whispered, the sound harsh against my ear, his breath on the side of my face enough to make my knees weak.

“Wait.” I pulled back suddenly and stared into his face, a perfect mix of desire and arrogance looking back at me. “How do you know my name?”

A corner of his mouth turned up in a sneer. My gaze lingered on that mouth, those lips, imagining the way they’d feel on mine even as I waited for his answer.

Order The Rescue now on Amazon.com