Reformed by the Millionaire is Maria’s latest release from Stormy Night Publications. It’s a sexy spanking romance with a happy ending (and lots of steamy sex and spankings)!

Here’s the blurb, and read on for a sexy sample!

After her plan to drop out of college and travel the country falls apart, nineteen-year-old Daisy Underwood finds herself sleeping on the porch of an upscale home to get out of the rain.

Victor Bennett is surprised to find a cold, hungry young woman on his doorstep, but he doesn’t hesitate to invite the wet, shivering girl inside and offer her a hot meal and a place to stay for the night. When he meets the cleaned up and properly rested Daisy the next morning, he is enthralled by both her innocent beauty and her obvious need to be properly taken in hand.

Daisy is delighted by Victor’s generosity, and when he offers her a room in his home and a job as his assistant she happily accepts. She soon discovers, however, that her handsome new boss will not tolerate laziness or disobedience, and it isn’t long before her careless disregard for his instructions earns her a trip over his knee for a sound spanking on her bare bottom.

Victor quickly proves that he will not hesitate to punish Daisy as thoroughly as necessary to teach her to do as she is told, even if that means her bottom ends up sore both inside and out. Though she is often left blushing crimson by his strict correction, Victor’s dominance arouses Daisy intensely, and when he claims her at last his masterful lovemaking is better than she ever dreamed. But can she truly dare to hope that she could be more than just a charity case to him? 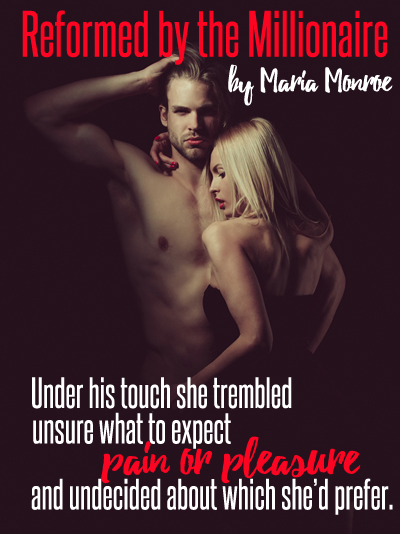 Sample from Reformed by the Millionaire :

The driver was waiting outside the luxury sedan, and he hurried around to open the door for Daisy and Victor. Immediately after telling the driver where to take them, Victor pressed the button to raise the separator between the front seat and the rest of the vehicle.

But something about the statement, the need to point that out, caused Daisy’s heart to beat faster. Such a simple fact shouldn’t have that much impact, but her pussy throbbed at the multitude of things Victor could possibly be thinking.

She didn’t have to wait long to find out.

“Daisy, it’s time to talk about the college courses.” His voice was low.

“I’m sorry, Victor. I’m grateful to you for the generous offer of paying for classes. And I definitely plan to sign up. I just got distracted…”

“No excuses, Daisy.” His voice was gentle but firm. “It’s the one maxim I live by, the one thing that keeps me going and, I believe, is the hallmark of my success so far. No excuses. Not for anything. Ever. Just get it done.”

“You’re right.” The words made sense. If you gave yourself an out all the time, how could you expect to achieve great things? “I like that.”

“Good. But I’m afraid you’re not going to like what happens next.” Gently he put his hand to Daisy’s cheek, turning her face so they were looking into each other’s eyes.

“What… what happens next?”

“I’m going to punish you for not doing what you were told, Daisy.”

“Oh.” She breathed out, then swallowed hard. “Um, what kind of punishment are you going to, you know, give me?”

He brought his face closer to hers, as though he was going to kiss her. But before their lips met, he whispered, “I’m going to spank you, Daisy. Right here in the car. You’re going to get over my lap, and I’m going to spank you until your bottom is red and you’re crying. Do you understand?”

Daisy could hear her heart pounding in her ears, and no amount of clenching would stop the surge of wetness between her legs. Yet fear, too, intermingled with the desire, leaving her weak and trembling.

“Yes. I understand.” Her voice was small.

Was this really happening? She looked beseechingly at Victor, as though willing him to tell her he was only joking. That surely a grown man wouldn’t spank a grown woman in the backseat of a car on the way to dinner.

But his eyes were deep and dark, and he wasn’t smiling when he said, “Face down over my lap, Daisy. Now.”

It was awkward getting on her hands and knees on the big backseat to arrange her body over Victor’s lap, and it was even more difficult because she was trembling in anticipation and nerves.

“Good.” Victor adjusted his position slightly, then placed one hand on her upper back. With the other hand he smoothed the skirt of her dress down. “It’s a good thing you chose to wear a dress today, isn’t it?” he mused. “Taking down a pair of pants in the car would be even more awkward, wouldn’t it?”

“Taking down?” she gasped.

Victor chuckled. “I’m sure you’ll agree that a spanking on the bare is more effective than one over clothes, no?”

“I asked you a question.” Victor’s voice was low but firm.

“Yes,” she managed. “A spanking on the bare will, um, be much more effective.”

“I’m so glad you agree. Of course, you’ll be getting a warmup, first over your skirt, then on top of your underwear, and then I’ll pull down your panties and spank you quite hard and for a long time on your bare bottom. Is that clear?”

“And I expect you to hold still and not try to cover up or get out of position. Do you think you can do that?”

“Yes.” No! she screamed in her head. But she knew that wasn’t the answer he wanted.

His hand caressed her ass lightly, moving over her skirt, traveling low enough to palm the bottoms of her round globes. Her pussy clenched, desiring his touch. If he lifted her skirt and began to explore, she’d let him. She’d welcome that. But she knew she was getting something else.

“Have you ever been spanked before, Daisy?” His hand continued gently massaging her bottom.

“I think you’ll be surprised at how much it hurts. But also at how much you’re able to take.” His voice was warm, almost kind, which was strange in combination with the fact that she was lying, ass up, over his lap. “I’d like to start now. Ask me to begin spanking you.”

What? Not only was he going to spank her, but she had to ask him to? She gulped.

She could smell the leather seat under her face as she waited in anticipation for him to start. He gripped her waist with his left hand, and she knew it was going to happen.

The first spanks over her skirt filled her with relief. This wasn’t so bad. It stung, and the fact that she was being spanked at all was embarrassing. Still, she was able to relax slightly as he continued to land smacks on her bottom.

After a few minutes, though, he stopped. “We’re going to go harder now, Daisy. Remember that you deserve this. I’m doing this for a reason.”

“Yes, Sir.” The Sir slipped out naturally, and when it did, she felt Victor shift beneath her slightly, the undeniable hardness of his cock pressing into her as he did.

He began spanking once more, this time hard enough that she cried out a little.

“Baby, this is just the beginning.” His tone sounded like he was smiling. Like he was enjoying this. “Think about how it’s going to feel when your panties are down and I’m spanking your bare bottom.”

Could she take it? She suddenly wasn’t sure about that. What had seemed like a good idea, something hot and sexy and kinky, was now actually more than a bit scary. Yet, as he stopped spanking long enough to lift her skirt, she felt her pussy get even wetter.

Daisy’s cheeks burned as she raised her butt so Victor could arrange her skirt up high on her back, leaving her completely exposed excerpt for her underwear.

His finger traced the edge of her lacy panties. “Beautiful,” he whispered, his voice like a caress on her almost-bare skin. “Your ass is so perfect, Daisy. And it’s such a lovely shade of pink right now. That pink, in contrast to the black lace, is quite an amazing image. But my aim is to get your bottom bright red. So I’m afraid I’m going to have to spank you much longer and much harder.”

Daisy clenched her fists as he began to spank her once more. Without the skirt as a buffer, it hurt even more, and she began crying out in earnest. Each time his hand landed on her delicate skin it felt like tiny pinpricks of fire, and within a few minutes she was writhing on his lap, staying in place but just barely.

He stopped and began to massage her butt. “How does it feel so far, Daisy?”

“It hurts!” She didn’t want to cry, and she knew she deserved this, but tears stung her eyes.

“Of course it does. That’s the point.” There was humor in his voice, and somehow the fact that he was enjoying this so much added to her humiliation.

“If you’d done what I said, you wouldn’t be here, over my lap with your skirt up being spanked like a little girl, would you?”

“Good. Now, Daisy, I want you to ask me to pull your panties down and spank you on your bare bottom.”

“Daisy.” There was warning in his voice.

Daisy took a deep breath. She could do this. Swallowing hard, she spoke. “Victor, Sir, please pull my panties down and spank my bare bottom.”

“Good girl.” His voice was soothing despite the fact that he was about to begin spanking her once more. “Lift up again, please, so I can get these down.” He grasped the fabric of her underwear and, as she rose up slightly, he worked them down her thighs.

Get Reformed by the Millionaire on Amazon now! 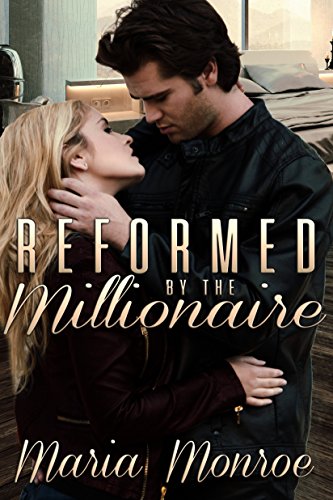