hi! I’m Alexis Alvarez, and welcome to the “My Sexy Saturday” blog hop.  I’m going to share a piece from my upcoming novel,  Myka and the Millionaire, which is set to release on Friday October 13th from Stormy Night Productions.

Excerpt from Myka and the Millionaire

Holy hell – he was looking right at her. His eyes were blue, the color of sapphires, the color of the Caribbean at dusk, and he stood some distance down the busy street watching her, one hand in his suit jacket pocket. He spoke into a cell phone. Myka couldn’t hear the words, but his stare was so intense that he could hardly be focused on his conversation. The humid evening breeze ruffled his black hair and she couldn’t look away. Tucking a stray lock of her own reddish-brown curls behind her ear, she smoothed her black mini skirt down her lean hips and took a deep breath. She needed to go talk to him. She had to get closer–

“Myka!” A cutesy scream interrupted her thoughts, and probably those of everyone within the block. Myka turned to Kylee Miranda, the world’s hottest young pop star. The girl stood like a sun at the center of a milling entourage, the hub of her own blazing universe, which hovered outside one of L.A.’s hottest nightclubs. “Did you hear me before? I can’t find my lucky lip gloss. Check my purse?”

Blinking, Myka took the beaded handbag that hit her in the stomach and rummaged through expensive compacts and countless gum wrappers, half of which were filled with desiccated lumps of pink. By the time she located the item and handed it over, Kylee seemed to have lost interest.

“Myka, can you hurry? We’re going into the VIP.” Kylee waved her hand and wrinkled her nose at the slender mauve tube, and Myka nestled it back into its nest of trash. Then, unable to resist, she turned to look again, ignoring the noise and the traffic, the stream of luxury cars washing past like molecules of the city’s own cologne.

The man was still there. Their eyes met and locked, and Myka felt a surge of adrenaline. That gaze – it was nothing casual. And when he smiled, a slow lazy smile, his eyes inspecting her with approval, she felt a rush of butterflies.

The entourage moved forward like one animal with dozens of legs, an unsteady vaguely-outlined mass of shifting ectomorph, a school of fish, and Myka was sucked into the creature’s belly. When she extricated herself to look backwards one more time at the man, he was gone.

Blurb for Myka and the Millionaire

When Myka meets handsome millionaire Gabriel, an enigmatic businessman with a French accent and piercing blue eyes, she feels a instant attraction that eclipses anything in her life.  He’s the sexiest, most interesting and intelligent man she’s ever met. Sick of her job for a spoiled rock star, and working double time trying to create her own consulting business on the side, Myka is eager to explore the intriguing world of domination and submission that Gabriel offers. It’s an escape and a destination all at once, and receiving pleasure and punishment at his hand feeds her soul.  The further she goes on this adventure, the harder she falls, and soon she’s lost her heart. But Gabriel is adamant that they are only temporary, just about sex and submission. He refuses to discuss his past. When secrets surface and people around them are determined to destroy their tenuous bond, it’s not clear whether he cares enough to fight for her…and for love.

Stay tuned for a cover reveal and longer excerpts.  To read another excerpt, visit my post here. 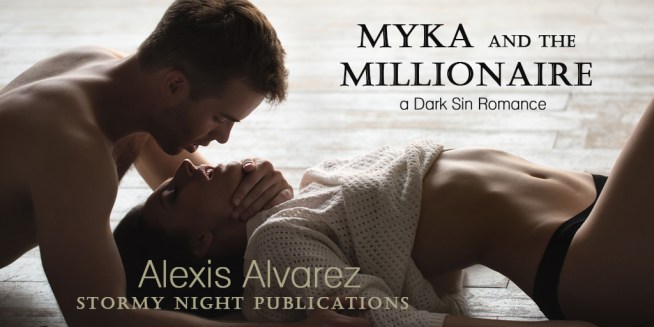 Please visit the other authors in this blog hop.

Thanks, and happy reading!

One thought on “Submission and Passion”