Greetings, readers!  I’m Alexis Alvarez, and today I’m excited to have author Jaye Peaches visiting the blog to talk about her new romance novel, Sophia And The Duke.  Let’s hear from Jaye! 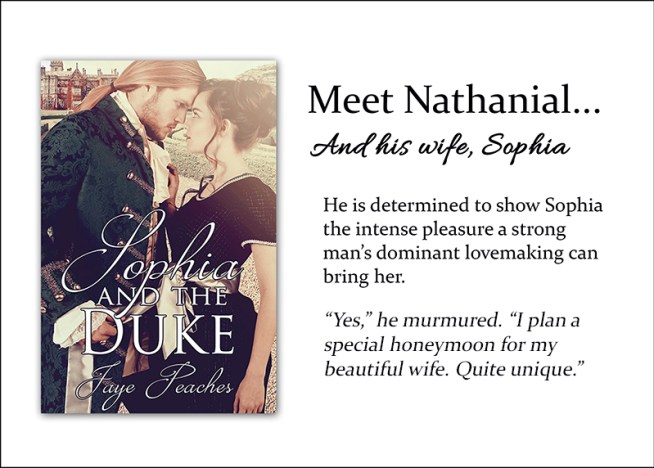 Hi Alexis, thank you for inviting me to Graffiti Fiction.

I’ve brought along an extract from my latest spanking romance book, Sophia and the Duke which is set during the Regency period and presents plenty of opportunities for romance and remains one of the most popular eras since the days of Jane Austen.

I wrote this book quite quickly, even so the idea for it had been sat in my head for a while and I needed a little boot up the bum to get it going, and my publisher obliged by helping tidy up the outline for the story. Always helps to have the publisher’s input in the earlier stages so not to wander too far from the point of the story. Spanking may be the kinky element in the book, but good characters and plot are needed to keep it believable and romantic.

Sophia is already a widowed duchess at a tender age and has come to the attention of the new duke, Nathanial, who has returned from living in Canada as a fur trapper having not expected to inherit the title. His experience of the world is somewhat different to Sophia, however, he still expects a good marriage. He’s discussing his proposal to Sophia with her grandmother.

Excerpt from Sophia and the Duke

The Comtesse d’Orbec proved to be as formidable as Sophia had described. She flapped her fan before her face, eyeing Nathanial up and down, as if she expected to see a skunk or raccoon poke out from behind him. However, she stopped short of referring to his long absence and remained polite in her choice of words. Her policy was not to mention his past and it worked for both of them.

“You will marry soon?” she asked once they’d made their proclamation. The corner of her lips twitched. Behind the facade of indifference, Comtesse d’Orbec was delighted at the news as it meant Sophia returned to her status as the duchess, rather than dowager, and thus elevating Maria’s own profile immensely.

“Indeed, once the banns are read, although I might arrange for the licence to be released earlier.”

“You are in great haste, your grace,” drawled the comtesse in her French accent.

“I see no reason to delay. Sophia is all that I need from any woman and I desire her to be my duchess.”

Maria smiled. “She will be a fine wife. Your cousin, Percy, was much taken by her. We are fortunate that she will be honoured with the title for a second time. Most unusual.”

“But not unprecedented,” he pointed out.

Sophia had remained silent throughout the interchange, her hands clasped before her and her head slightly bowed. Nathanial had never seen her so demure. He believed he’d made the right decision with the speed of their betrothal. The quicker he had her as his duchess, the better for their relationship. She needed his firm hand to keep her from slipping away from him and he couldn’t bear the thought of her not at his side. Soon, he would touch her intimately, and know her body as well as her mind. Then he would make love to her and show his dominance beyond words.

Whether he could contain his rougher side would be a challenge. He doubted Percy had treated her to a display of sexual prowess. What he desperately wanted to prove was that love could be about pleasure and if she submitted to him in the bed, he would capture more than her heart. He wanted her respect to prove he was both man and duke.

The comtesse snapped her fan shut. “I see, your grace, that we are perhaps of the same mind with regard to Sophia.” A slow, wry smile spread over her face. “She will learn much from you.”

“I have plans,” he said softly. Those ideas had been born only in the last hour as he pondered her reliance on maids. She needed to spread her wings and learn self-sufficiency and think of her duty to him beyond the bedroom.

Sophia’s head shot up and she stared at him, her lips quivering. She wanted to ask, but those manners she professed as important kept her mouth sealed.

“Yes,” he murmured. “I plan a special honeymoon for my beautiful wife. Quite unique.”

Blurb for Sophia and the Duke

After the passing of her husband, the elderly Duke of Brockenhurst, twenty-two-year-old Sophia chafes at her family’s expectations during her lengthy mourning period. When she is free to re-emerge in society at last, at her grandmother’s insistence she entertains the courtship of Nathaniel Hartwell, a distant cousin of the old duke and the man next in line for the title.

To her shock, Sophia learns that Nathaniel has spent the last eight years living as a trapper and fur trader in the mountains of Canada, isolating himself from the world after the tragic death of the woman he loved. Though he is a rough, uncivilised man, his devilishly handsome looks and commanding presence excite her in a way nothing ever has before.

Sophia sets out to transform the new duke into someone suitable for polite society, but when her comments become disrespectful and mocking Nathaniel takes issue with her behaviour. Almost before she knows it, she is over his lap and her aristocratic bottom has been bared for a sound spanking.

Knowing that it is the right choice for all concerned, Nathaniel asks her to be his wife, but despite the fact that their marriage begins as one of convenience he is determined to show Sophia the intense pleasure a strong man’s dominant lovemaking can bring her. Though her spoiled attitude occasionally earns her a bright red, well-spanked bottom, as the weeks pass her desire for him grows ever stronger. But can love truly bridge the gulf between people from such different worlds? 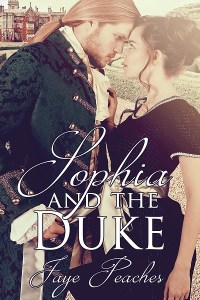 When not writing, Jaye is busy spending time with her family, enjoying music, sometimes composing or drawing and if the weather allows, gardening.

Thanks for reading, everyone!  Cheers until next time!