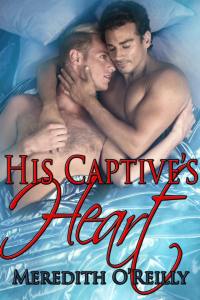 I’m Alexis Alvarez, and I’m so excited to have author Meredith O’Reilly visiting my blog today!  She’s going to share a snippet from her new romance novel, His Captive’s Heart, a sexy M/M book that will appeal to anyone who loves a good love story. Let’s hear from Meredith.

Hi Alexis! Thank you so much for having me on your blog today!

Here’s a snippet from my latest release, His Captive’s Heart. In this snippet, Marcus is alone in bed and is thinking about his feelings for Dimitri.

I opened my eyes and found myself back in Dimitri’s bed. Lifting my head, I glanced around the room and realized that he wasn’t there. My head fell back against the pillows as I thought about what had happened this morning.

Dimitri knew exactly how to tease my body and pump every ounce of pleasure out of me until I couldn’t lift my head. It felt wonderful to have him control my pleasure. But shockingly, what had been even better about this morning hadn’t been our play session. It had been when he’d said that he was proud of me. I didn’t exactly understand why, but hearing that from him had made me feel like I was on top of the world.

But after that talk, I’d never planned on seeing him again. I didn’t think that the club scene would ever be for me because I wanted to have my partner with me. I knew how hard it would be to find someone who not only accepted the submissive part of me, but who also would like the idea of going to a club and publicly spanking me. I knew most people wouldn’t feel comfortable doing a scene in public.

Leaving the club last Saturday, I really hadn’t had any feelings toward Dimitri—except that I thought he was super attractive, but who wouldn’t? That would have been like someone saying that Joe Manganiello wasn’t super attractive.

On Friday when he’d kidnapped me and I woke up, I still hadn’t had really strong emotions toward him. Maybe a little fear because I had met him once and he was fulfilling one of my fantasies. On the other hand, I was grateful that he was fulfilling my fantasy; he’d really had made it perfect so far.

The sex and playing had been amazing. I’d tried things I never thought I would try, but with Dimitri I wanted to try new things. I was looking forward to the next twenty-four hours and everything else he had in store for me. He really was going out of his way to make sure I was comfortable and was having a good time.

But I still didn’t understand why my heart had beat faster when he told me he was proud of me. I had just met him. I wanted to chalk it up to the fact that I’d just come down from one of the best orgasms I’d ever had in my life, but I didn’t think that was the case. No one had ever made me feel an emotion that strong in my twenty-nine years of life.

The only logical explanation was that I was falling head-over-heels in love with my kidnapper. That didn’t really make sense either because we hadn’t even been on a proper date. Love was supposed to take time, not happen literally overnight.

Twenty-nine-year-old lawyer Marcus Bradberry has fantasized for years about finding a firm-handed man who would not hesitate to provide both guidance and discipline while also bringing him the kind of fulfillment he’s only dreamed about. When he meets Dimitri Anderson, the owner of a local kink club, Marcus takes a chance and shares the wildest fantasy he’s ever had with him.

Though he confesses to Dimitri that nothing excites him more than the idea of a being overpowered, kidnapped, and mastered completely by a strong, handsome man, Marcus is nonetheless shocked when Dimitri takes it upon himself to bring this fantasy to life. When Dimitri surprises him after work on a Friday, Marcus soon finds himself blindfolded, handcuffed, and driven away to an unknown place.

It quickly becomes clear that Dimitri knows exactly what his captive sub needs and is more than ready to give it to him, but as the weekend progresses, Marcus realizes that trusting his new master is at times much harder than he expected. Will he surrender to his most secret desires or will his fears drive him away from his master’s loving arms?

Meredith O’Reilly cannot believe that she has four books published! It was a little over a year ago that she had her first book published with Stormy Night Publications. She began writing age play stories, but has since branched out to new sub-genres of romance.

In her spare time, Meredith goes to school, watches a little too much Netflix, and experiments with learning how to cook new things in the kitchen. Mostly she tries to balance her life between school work and author work. That’s a task that is easier said than done, most times. 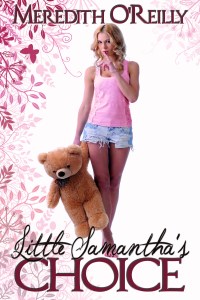 Little Samantha’s Choice, Meredith’s first book, is  on sale for 50% off, along with three other amazing books from Stormy Night Publications! You don’t want to miss that deal!  (Click on the book picture to find it on Amazon.)

Samantha Briggs always had a suspicion that her husband, Jackson was hiding something from her. When he’s away on a business trip, Samantha finds out her husband’s secret, he wants her to act as his little girl on the weekends. Deciding to give it a try, Samantha falls in love with being Jackson’s little girl. But when she slips up and embarrasses herself by behaving childishly during a stressful morning at work, she reconsiders their new relationship. Will she give up the lifestyle she’s grown to love so much, or can she come to accept that there is nothing wrong with choosing to be her daddy’s little girl?

Thanks for having me over again!

Thanks for joining us today. Happy Reading!