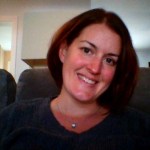 Disclaimer: After writing this post, I realized that my sister, Maria, had recently posted something remarkably similar already on our site. At the time, I hadn’t even read it (bad sister!), and when I did, I thought I should scrap this one and start over. But then I realized that we’re both dealing with similar difficulties in managing kids, and life, while trying to write. So I decided to post anyway, because I think it gives extra attention to the challenges of writing erotic fiction in the context of children and other daily life interruptions. Next time, maybe I’ll write about the time my husband came home early from a business trip while I was in the midst of describing a particularly steamy moment…that story has a much different ending than this one.

This is my first blog post. Ever. I’ve long liked the idea of it, but haven’t had the time (lame excuse), or the idea that seemed worthy of writing for everyone to read. And then, the other day, I found myself in a writing situation that made me laugh, and I wonder if anyone else has had to deal with this. And if so, how you’ve handled it.

I have one novel published now, and I’m working, when I can, to finish my second. I have a husband, two young kids, two dogs, and a full time job. So writing, unfortunately, has to fit into snatches of time when my attention isn’t needed elsewhere.

A week or so ago, I found that moment of time. Work was done, we had no evening sports commitments, and, most importantly, I was inspired. The kids were distracted with…something? And my writing was travelling into a hot sex scene. I was feeling it! And it was going awesome!

Then the phone rang.

It was a friend, asking for a favor. Could I watch her son for her while? Her son and mine are good friends; we do these things for each other. So of course the answer was yes.

Twenty minutes after the call, the boys were playing Legos quietly (well, as quietly as eight year old boys ever are), and I was curled up on the couch writing. It felt a little weird writing a racy sex scene while there were kids in the room, but my laptop was shielded from them, and they were uninterested in me.

And then, just as my hero’s fingers were tracing the lacy edge of my heroine’s panties while she moaned and urged his hand to touch her…

Kids (whiny): What is there?

Me: Whatever, just go get it yourselves.

I heard rustling in the kitchen, some noises that sounded suspiciously like crackers being crunched under someone’s foot. But I let it go. This scene was going so well, and I just wanted to finish! 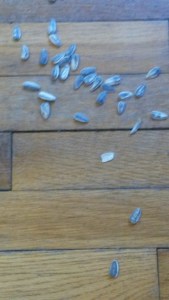 Later, I would find sunflower seed shells on my kitchen tiles. If you’re anything like me, the smallest crumb on the floor forces me to get the hoover out. I honestly can’t deal with a messy house, especially my floors. To this day, I’ll always say the steam cleaner was one of my best purchases. But please find the best tile steam cleaner, don’t use a knock-off branded one, they won’t do anything but spill water all over the floor.

“Mom! Mama! Can you make us some chicken nuggets?”

Bad-mom moment, I know. But they were whole grain goldfish. That’s something, right?

“No, get them yourselves.”

Back to writing again. I got a good 20 seconds in before:

“Mom, can we have something to drink?”

“Sure, you know where the glasses are, and the water.”

“Can we have Sprite?”

Back to writing. But now it’s hard to think about a throbbing erection when I have two rowdy boys making a mess in the kitchen.

I go to investigate, and this is what I find: 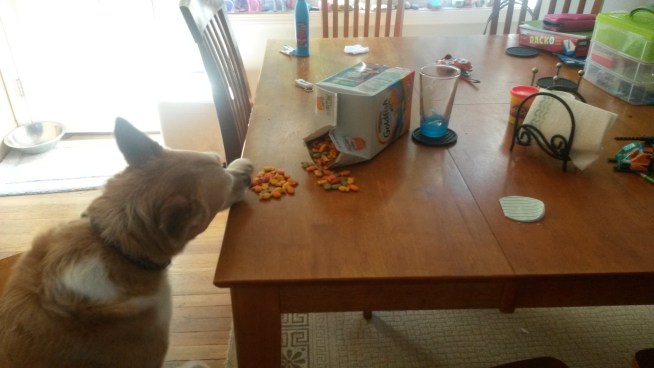 I clean up, and try to go back to writing. While I was gone, my daughter has planted herself in the middle of the living room floor and is watching Spongebob Squarepants.

A few minutes later, from the boys:

“Mom! Can we play outside?”

Maybe now I can have some quiet to focus.

Hah! Seconds later, the telltale sound of the hose turning on. Shit. This can’t be good. And it can’t be ignored. There’s a reasonable chance they’re directing the end of the hose directly into the basement through the broken window (that, incidentally, they broke last time they were playing outside).

The writing mood is broken. I shut my laptop with the hope that I’ll recapture the inspiration later. For now, it looks like I’ll be playing in the yard with the kids. I think I need that cold water from the hose right now, anyway.