Welcome to the Fall semester at Maine University at Deerfield! I am thrilled to see returning students again and welcome all new and transfer students.

We look forward to an amazing year, full of new opportunities to learn and grow. Thank you for choosing MUD, and best wishes for a productive and inspirational year!

Lia’s freshman year at college hasn’t started out so great. She’s having a hard time making friends, and she’s miserable and homesick.

She’s positive he’s out of her league. He’s holding back because he knows he’s all kinds of wrong for her. But when things start to heat up, Lia’s freshman year is about to get way more exciting than she ever anticipated.

Here’s an excerpt from JULIAN & LIA:

For what seems like a long time the movie plays while I stare at Julian’s profile, feeling lost and confused and completely unwanted. The truth is, he’s making it clear he doesn’t really want me around, and I’m feeling increasingly uncomfortable. Why am I staying when all he’s been tonight is rude? I gather up my pride and my nerve, grab my sweater, and head to the door.

“So, I guess it’s late. I’ll just finish the movie in class. Or whatever.” I put my hand on the doorknob, wishing he’d say something. Did he not hear me? It’s weird that he’s just silent. Weird and rude, I think, a surge of anger coursing through me. He doesn’t need to be an asshole, whether he likes me or not.

I turn the doorknob when he says, “Wait.”

That single word practically stops my heart. Spinning around, I face the room and Julian. He gets up in one fluid movement and stalks over to me. I back up against the door as he moves closer, close enough that I can feel his breath and warmth, can smell his soapy scent, slightly spicy and completely intoxicating.

“What?” I ask. I want to sound angry—I am angry, or at least I was. But now a shiver of excitement tickles through me.

Julian’s silent for a few moments, but his eyes are looking directly into mine. They’re so green and strong and unwavering, and it’s almost more intense than if he were speaking. His face looks conflicted, just like it did in my dorm room.

Suddenly he put his hands on the door, on either side of my head. “Lia,” he says slowly in a deep voice, deeper than he usually sounds, “because of you I have not been able to concentrate on the movie for even a second. You have done nothing but distract me all night long.”

“You did.” His words are harsh, a delicious contrast to his finger gently running along my bottom lip. I fight the urge to lick the pad of his finger, to suck it into my mouth. My breath catches when he moves his fingers to my neck, running the backs of them down against it, then a little lower. One finger curves down along the side of my right breast, gently, then he moves his hand up to my head. He winds his fingers through my hair, pulling me forward while he leans down towards me. We kiss, his lips so full and hungry, like he can’t stop or won’t stop, and I kiss him back, feeling my whole body grow tense with desire. I can taste the beer he drank, but also that almost familiar undertone of mint and chocolate. My eyes close, my entire body growing weak.

When his hands land on my hips, the heat of them warms me through my clothes. He grips me hard, then loosens his hold again, as though he can’t make up his mind. He moves a hand up my waist, higher, and touches my nipple through my shirt.

He looks down at me and grins, a smile part mischievous and part dark, and keeps his fingers there, slowly circling my nipple through my shirt until it’s hard. I want more; I want him to touch my skin, but I don’t know how to ask for it. Between my legs a steady pulse beats, and I’m so wet I can barely stand it.

“Julian,” I whisper. My body arches towards him, almost against my will. His eyes grow darker, and he places both hands on my hips again. For a few seconds he stands still, just staring into my eyes, his breath uneven.

Finally, after what feels like an eternity, he leans down towards me again. I think he’s going to kiss me more; I want him to so badly. Instead, though, his lips are near my ear, his voice rumbling against my skin.

“What I want,” he whispers, “is to bring you into my bedroom right now, take off all your clothes, and fuck you so hard you would never, ever, forget the way I feel inside you.” He’s breathing harder now, or maybe that’s me, and I dare to reach out, to touch his stomach through his shirt, running my hand down lower and lower to the top of his jeans. He licks my neck, kisses it, then says, “If you hadn’t told me what you did the other night, that’s what we’d do right now.”

I roll my eyes. “Does that really matter?”

“It does. The things I want to do to you—you aren’t ready for it. For any of it.” He pulls away from me. “You should go.”

He’s treating me like a kid. I want to stomp my foot and say, “But I don’t want to go!” I have too much pride for that, though. Without a word, I open the door and slip out into the  cold night. I can see my breath, and I pull my sweater on over my head as quickly as I can.

“Fuck. Let me walk you.” Julian steps out behind me, shutting the door.

“Instead of just the partial asshole that you already are?”

“Lia, I don’t want to hurt you.” He picks up his pace to keep up with me. I don’t know if he’s referring to physical pain or emotional pain. I don’t really care, though. I feel humiliated and stupid. Of course Julian wouldn’t do anything with me. I’ve known all along that he’s out of my league.

When we get to my dorm, I go inside without even a look back at him. 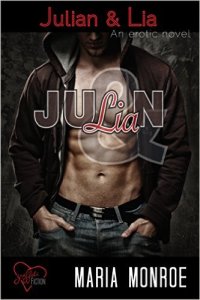